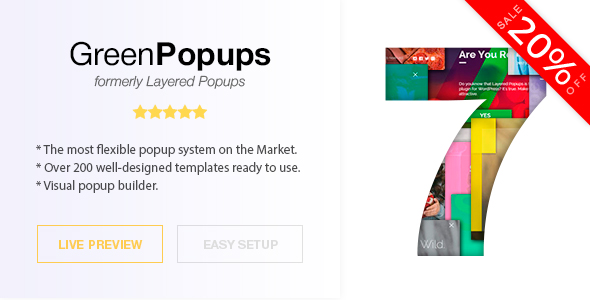 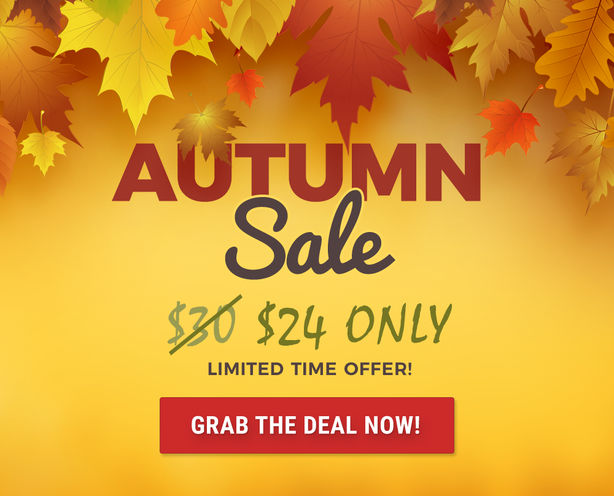 Internet is full of boring popups. So, it’s a time to break this trend. That’s why we created Green Popups (formerly Layered Popups). With this plugin you can realize your imagination and make your own unique multi-layers animated popups or use over 200 professionally designed ready made templates from our library. You can embed AJAX-ed subscription/contact form which works with a lot of CRM, marketing and newsletter systems. You can raise popup on page load, on exit intent, on scrolling down, on user’s inactivity, on AdBlock detected or show it when users click something. Moreover you can use any popup as a part of post/page content or as sidebar widget. Make your website more attractive with Green Popups.

With our new Advanced Targeting system it’s really easy to adjust how and where to display popups. It can be posts, pages, products and even any custom post types filtered by any available taxonomies, dates, user roles, etc. Pretty flexible. Isn’t it?

GREEN POPUPS IS THE FASTEST POPUP PLUGIN EVER

Green Popups keeps your website as fast as it was before. It does not reduce the PageSpeed score at all. And these are not just words. To prove that we created 2 exact copies of WordPress installations: with and without Green Popups. So you can test it using any tools or click images below to view GTmetrix results. 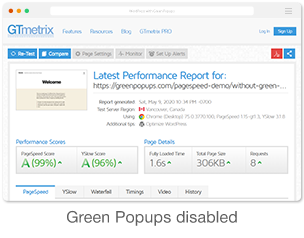 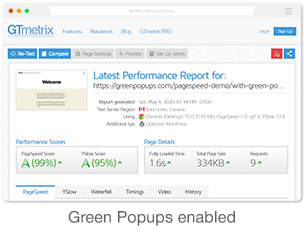 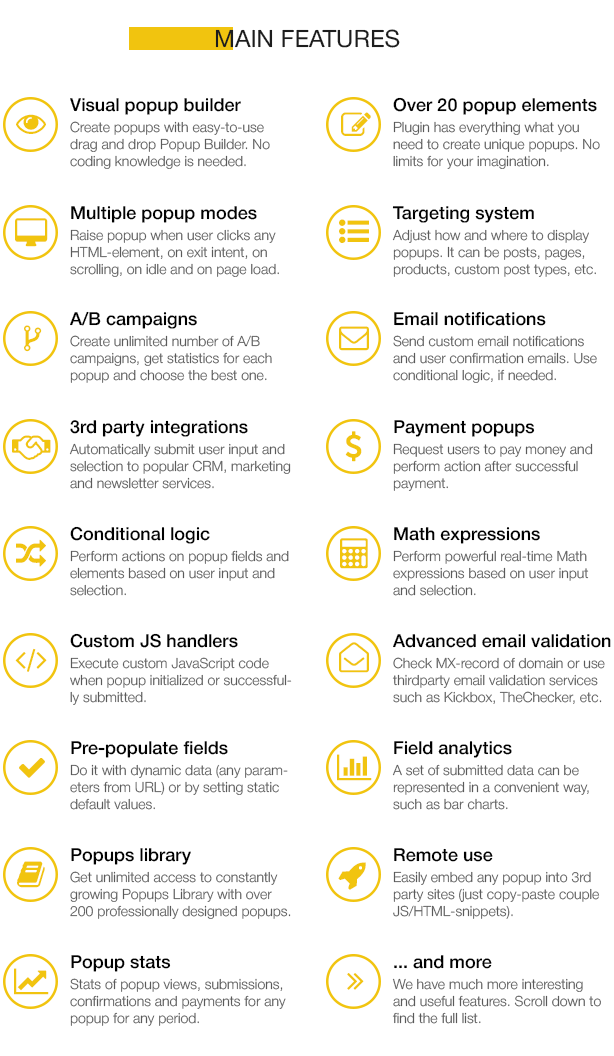 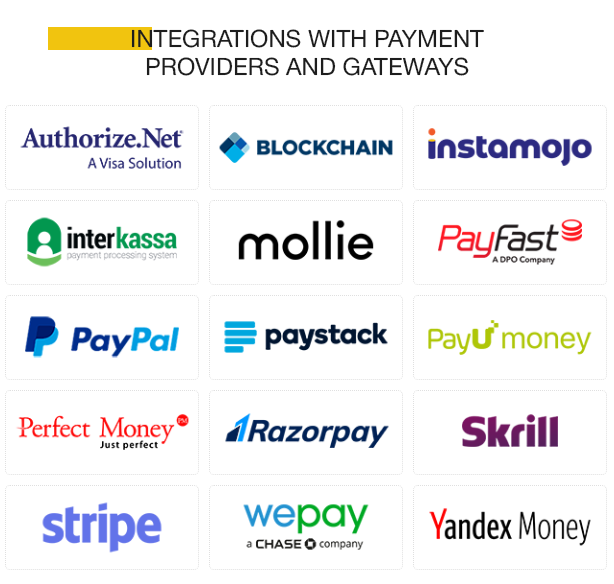 If you have any difficulties with uploading zip-archive, please do it manually using FTP:

Once installed and activated, plugin creates “Green Popups” menu section in left side menu. All further actions, related to plugin functionality, are done through this menu section.

Awesome plugin. I have been looking for a good popup plugin that will let me build what I want with full customizability, and without being too difficult to handle. This plugin answers everything I looked for. Thank you very much!

The sheer flexibility and functionality that is incorporated into this plugin make it one of the best purchases I have ever made. Works straight out of the box and comes with so many cool features, that it just blows me away. Kudos to the developer and thank you.

Design: 5-STars Support: 5-Stars Features: 5-Stars I have tested many other popup-components like popup-domination, Pippity and others. Green popups is a killer in the design, is great in the rest (code, features, support,…) and the cheapest of all of those components. Buy it, test it and you will never use any other popup-component. PS: I don´t use it on a wordpress-page, but I installed a dummy-wordpress-page and use the external-popup-feature. Works brilliant!

This is one of my top 5 plugins. It does exactly what it says on the box and It works a beautifully! Beyond that, it is so flexible that you can use it for much more than what it was made to do. I have used it to make popup video players, menu systems, popup sliders, popup info boxes, and more. It is one of those plugins that can go far beyond its original intended purpose. Just a little imagination with this plugin will take you far. My thanks to the developers for creating an excellent plugin and doing an excellent job of supporting it as well. Obviously, I highly recommend Green Popups!

I wan to thank the author for this amazing plug-in. I have searched high and low for something like this for a while. It never occurred to me to check Codecanyon. I have only just purchased it a few days ago but already I know its one of the best plugins I have ever bought. Amazing and well worth the money. So much customization and built in integration. Thanks again! 6 out of 5 stars.

Love this plugin. It’s extremely flexible. You can build anything. Comes with dozens of pre-made popups you can further customize. So flexible you can go a little crazy customizing everything. The coder has thought of everything: A/B testing, mobile vs. desktop popups, integration with lots of email services.

Super integration. Perfect ajax mode (was searching a lot for that). Lot of possibilities! Contemporary CSS-animation support! Best Modal / Pop-Up Plugin out there!

Just wanted to say – Love this plugin. I have been able to use it in conjunction with and without the optional Tabs add-on to create some pretty nice popups! They have nothing to do with forms or mailing lists, but rather just informational popups. Thank you for properly allowing for HTML and Shortcodes. And for the wide array of sample files. Good support too! Excellent work! And, just in case anyone is wondering – I am not affiliated with, or taking any payment from the developer of this plugin to add this comment. I have dealt with a crap-ton of plugins from Themeforest and this is one of a handful that met and exceeded my expectations. Most of the others stop short anywhere from 20% to 90% of my personal expectations met.

Dude, just to want to drop a word and say thanks! Your plugin is the best popup plugin here in Codecanyon (I already have 7 of them). Keep rocking!

Lightweight, plenty of customizations, and I love the fact that the author included his sample layered popups in the download, just in case you need a kick-start to learn how to most effectively use the plugin. It really enhances your website in a professional manner!

I have to say that i LOVE this plugin. I just installed it on a new site and used the click to trigger it. It works flawlessly. I love the many templates available, the flexibility and the ease of using it. Thank you sooooo much!

Just wanted to post a note and say thanks. We have now purchased two of these layered popups for two websites. This is not the first popup plugin we have bought on Codecanyon, but it is by far the best, and the customer support is excellent.

If you need pop-ups, you need this plugin!! I tried anyone under the sun, including custom coding FancyBox pages, and especially Pop-Up Domination, for WP and as stand-alone, and NOTHING beats this plugin. The author is PHENOMENAL in his support! He cleaned up the code for page loading speed overnight. He integrated OntraPort for us overnight, he responds to every question within hours. Seriously, I have never come across a more helpful and willing plugin-developer in my life. And we haven’t even talked about the plugin yet… This plugin is AWESOME!!! So flexible, so easy to use. I literally created over 200 different pop-ups for the various sign up options and areas of our website within hours. ALL are split-testing. You need pop-ups, you need this plugin and no other. The code on the page is super clean and really uses the minimal amount of scripting in the page, which can’t be said about other plugins at all. For the price, this is a steal!! If I was the author, I would charge at least the $97 that competitors are charging, with way messier code, and really the same old, boring, out-of-date pop-up designs! This is an amazing plugin, from a fantastic author!!

If you have any problems regarding using the add-on, please contact us for assistance.

The faster and most powerful WordPress Popups Plugin on the Market. 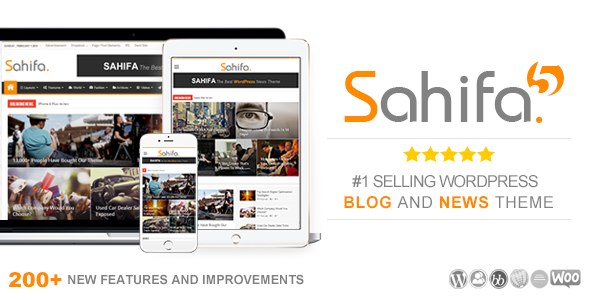 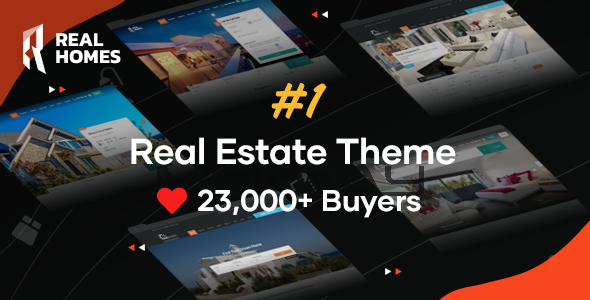